Maria de Torres (born 9 June 1909) is a Brazilian supercentenarian whose age is currently unvalidated by the Gerontology Research Group (GRG).

Maria de Torres was born in Ipojuca, Pernambuco, Brazil on 9 June 1909, the daughter of Firmina da Conceicao. She had 13 children (6 now deceased). She moved to Arcoverde in January 1971. In 2011, she suffered a fall at home and broke her collarbone. 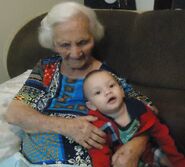 Maria de Torres at 105 with her great-grandson Weslley Siqueira and her two great-great-grandchildren.
Add a photo to this gallery

Retrieved from "https://gerontology.wikia.org/wiki/Maria_de_Torres?oldid=130166"
Community content is available under CC-BY-SA unless otherwise noted.