Maria Sao Pedro Conceicao [Portuguese: ...São...Conceição] (born 10 August 1901?) is a Brazilian longevity claimant. If her claimed age is true, she would be older than the world's oldest validated person, Kane Tanaka.

Maria Sao Pedro Conceicao claims to have been born in Sao Sebastiao do Passe, Bahia, Brazil on 10 August 1901, the daughter of Maria Felipe Conceicao. She worked until age 17 on a farm in Lamarao, Bahia. She worked in flour houses, planting and caring for the children of farmers, still as enslaved, even after the signing of the Golden Law on 13 May 1888. 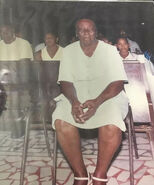 Maria Sao Pedro Conceicao in February 2021 at the claimed age of 119, being vaccinated against Covid-19.
Add a photo to this gallery

Retrieved from "https://gerontology.wikia.org/wiki/Maria_Sao_Pedro_Conceicao?oldid=174546"
Community content is available under CC-BY-SA unless otherwise noted.