Following her parents' footsteps, at the age of 16 she joined the Third Order of Our Lady of Mount Carmel, a branch of the religious Carmelite Order of the Ancient Observance.

In 1941, she married Jorge Daher, an influential politician, a councilor and deputy mayor of Angra dos Reis. The couple had 4 children: Jorge Daher (deceased as of November 2007), Maria da Glória, Pedro Salomão and Paulo Salomão. 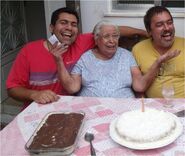 Pires Daher on her 102th birthday with her grandsons Ricardo Daher and Marcelo Daher.

Pires Daher on her 110th birthday.
Add a photo to this gallery

Retrieved from "https://gerontology.wikia.org/wiki/Maria_Aparecida_Pires_Daher?oldid=154767"
Community content is available under CC-BY-SA unless otherwise noted.