Maria Ana Morariu (21 June 1912 – 9 May 2020), known as "Tanti Mitzi" was a Romanian centenarian who was the oldest known living woman in Romania at time of her death.

She met George Cosbuc, who visited her father and General Traian Mosoiu in Gherla. In 1948, her fortune was nationalized, then she led a hard life during the communist years.

Maria Ana Morariu died in a nursing home in Gherla, Cluj County, Romania on 9 May 2020 at the age of 107 years, 323 days. Following her death, Barbara Massai became the oldest known living woman in Romania. 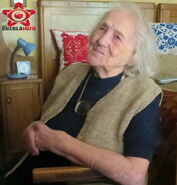 Maria Ana Morariu in 2014.
Add a photo to this gallery
Retrieved from "https://gerontology.wikia.org/wiki/Maria_Ana_Morariu?oldid=154083"
Community content is available under CC-BY-SA unless otherwise noted.