Sardarni Man(n) Kaur (1 March 1916? – 31 July 2021) was an Indian centenarian track-and-field athlete. She holds the world records in the Over-100 years old categories for a variety of events. When she was 103 she was given the Nari Shakti Puraskar award by the President of India.

Kaur is about five feet tall and only speaks Punjabi, but she has won multiple gold medals at the World Masters Athletics Championships.

Although she did not take up athletics until she was age 93. In 2016, she became fasted centenarian at a competition in the American Masters Game.

In anticipation of the 2017 World Masters Games, Kaur trained regularly at Punjabi University, in hopes of improving upon her own world record which she set over the years. Her coach was her son Gurdev Singh, age 79. At the 2017 games in Auckland she completed the 100 metre sprint in 74 seconds.

In 2019, she competed in Poland winning four events in her category - shot put, 60m sprint, 200m and the javelin. She completed the 60m race in 36 seconds and "felt great" afterwards. After this she and Gurdev were invited to tour universities in Baru Sahib where they inspired students when they spoke about their achievements and the diet they follow. The diet includes nuts and pulses, their own soy milk, kefir, wheatgrass juice, and sprouted wheat which they make into chapatis.

On 8 March (International Women's Day) 2020, she was given the Nari Shakti Puraskar award. The award was made at the Presidential palace in New Delhi by the President of India with the Prime Minister, Narendra Modi, in attendance. She is nicknamed the "Miracle from Chandigarh".

Man Kaur died after suffering from gallbladder cancer at Shuddhi Ayurveda Hospital in Dera Bassi, Punjab, India on 31 July 2021 at the claimed age of 105 years, 152 days. She was survived by her 83-year-old son Gurdev Singh. 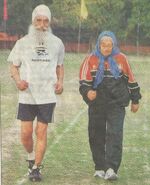