Luzia Candida da Silva claimed to have been born in Pitangui, Minas Gerais, Brazil on 24 February 1906. Her parents were Pedro Candido and Maria Dias.

In February 2016, she celebrated her claimed 110th birthday. She lived in the nursing home of "São Francisco de Assis". 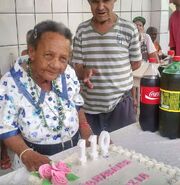 Luzia Candida da Silva on her claimed 112th birthday.
Add a photo to this gallery
Retrieved from "https://gerontology.wikia.org/wiki/Luzia_Candida_da_Silva?oldid=155323"
Community content is available under CC-BY-SA unless otherwise noted.