Lucy Mirigian (née Sarkisian; claimed birthdate 15 August 1906/may be born in 1907) is an Armenian-born American supercentenarian who is the oldest known living person in the U.S. state of California. Her age is currently pending validation by the Gerontology Research Group (GRG).

Lucy Mirigian claims to have been born as Lucy Sarkisian in Erzurum, Western Armenia, Ottoman Empire (present-day Turkey) on 15 August 1906. Her parents were Kevork (George) and Altoun (Mary) Sarkisian.

The family left the Ottoman Empire just before the Armenian Genocide and moved to the United States. Since then, Lucy has spent all of her life in California. 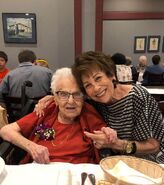 Lucy Mirigian on her 112th birthday (claims 113).
Add a photo to this gallery

Retrieved from "https://gerontology.wikia.org/wiki/Lucy_Mirigian?oldid=154855"
Community content is available under CC-BY-SA unless otherwise noted.