Louise Horne, DCSG (12 May 1912 – 28 March 2021) was a Trinidadian centenarian, politician and nutritionist who introduced the school meals programme. She was the first female senator of Trinidad and Tobago.

Horne was born on Lopez Street in Arima, Trinidad, Trinidad and Tobago on 12 May 1912. She never married or had children.

Horne served as an independent Senator in the Parliament of Trinidad and Tobago from 1976 to 1991.

She was awarded the honour of Lady of the Order of St. Gregory the Great by Pope John Paul II, one of just two Trinidadian women he so honoured. The second recipient was June Gonsalves (c.1927–2018). A postage stamp in her honour was issued in 1980.

In 2003, she published a book, The Evolution of Modern Trinidad and Tobago.

In 2012, she still lived in the house in Arima where she was born, which she had inherited from her parents, and in 2019 was living in a care home in the same area. 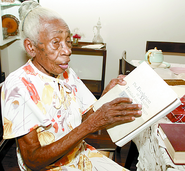 Retrieved from "https://gerontology.wikia.org/wiki/Louise_Horne?oldid=170934"
Community content is available under CC-BY-SA unless otherwise noted.