Nascimento claims to have been born on 17 August 1905 in Marechal Floriano, Espirito Santo, Brazil. She started working at the age of 13, doing domestic work for local families.

In a 2016 interview, Nascimento stressed the importance of voting: “I voted in every election. The people need to do everything so that the country does not fall into a dictatorship.” She mentioned her support for Getulio Vargas in 1950, and her plans to vote in the October 2016 municipal elections.

Nascimento moved into the Avedalma nursing home in 2008. 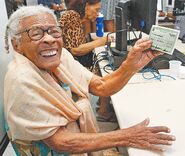 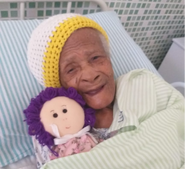 Nascimento, 114, in 2020.
Add a photo to this gallery
Retrieved from "https://gerontology.wikia.org/wiki/Leopoldina_Nascimento?oldid=151960"
Community content is available under CC-BY-SA unless otherwise noted.