Lawrence Nathaniel Brooks Sr. (born 12 September 1909) is an American supercentenarian who has been the oldest known living man in the United States since the death of Irving Piken on 27 February 2020. In addition, he is believed to be the oldest living person in the state of Louisiana and the oldest living American veteran of World War II. He is the second-oldest living World War II veteran in the world, after Mollie Walker. His age is currently unvalidated by the Gerontology Research Group (GRG).

Brooks was born in Norwood, Louisiana, United States, on 12 September 1909. Brooks was one of 15 children in a farm family living in Norwood. He moved to New Orleans as a young man, working in a laundry and parking cars before the Army called. He had three uncles who fought in World War I, and his brother, Chester, was a member of the United States Coast Guard. Brooks married two times. His second wife was Leona B. Brooks. He had 5 children.

Brooks received his draft notice at the age of 31. He was sent to Baton Rouge and Lake Charles, then San Antonio and Beaumont, Texas, and finally Fort Polk, where the group participated in the famous Louisiana maneuvers during the spring of 1941. He joined the United States Army in 1940 and did basic training at Camp Shelby in Hattiesburg, Mississippi.

He served in the predominantly African-American 91st Engineer Battalion which was stationed in New Guinea and then the Philippines during World War II. In 1942, the battalion spent 48 days on the RMS Queen Mary in a voyage from New York to Australia, a voyage made longer as the liner zigzagged to avoid German submarines in the Atlantic and Japanese ones in the Pacific. He served three white officers in his battalion, and his daily routine included cleaning the officers' sheets, shining their shoes, making sure their uniforms were clean, and accomplishing any task these officers asked of him.

Brooks attained the rank of Private 1st Class during the war. During his service, he had two alarming encounters. While he was stationed in New Guinea, the Japanese bombed the base where he was located. Additionally, Mr. Brooks was on a C-47 going from Australia to New Guinea, transporting a load of barbed wire when one of the engines went out. The crew had to work quickly to lighten up the load in order to make the plane light enough to continue on.

After the war, he worked as a fork lift operator before retiring at age 70. In 2005, during Hurricane Katrina, a few days after the levees failed and New Orleans flooded, Brooks moved to Los Angeles. He was widowed in 2005 when his second wife, Leona, died shortly after they were evacuated by helicopter following Hurricane Katrina. However, he returned to New Orleans a little more than a year later.

Brooks is considered to be the oldest living American veteran of World War II, succeeding Richard Overton who died on 27 December 2018. He celebrated his 110th birthday in September 2019. At that time, he had 13 grandchildren and 22 great-grandchildren. Brooks is able to walk with the help of a walker.

Brooks currently lives in New Orleans, Louisiana, United States at the age of 112 years, 4 days. He lives with his daughter, Vanessa (aged 59 in 2019), on Clara Street in New Orleans.

Brooks at age 111, being vaccinated against Covid-19 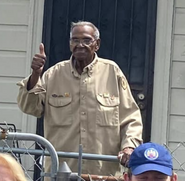 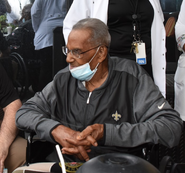 Brooks on his 112th birthday.