Kozaburo Nojima (Japanese: 野島光三郎; 18 December 1910 – fl. 1 February 2021) was a Japanese supercentenarian whose age is currently unvalidated by the Gerontology Research Group (GRG). He was the second-oldest known living man in Japan, after Mikizo Ueda.

Kozaburo Nojima was born in Japan on 18 December 1910.

Kozaburo Nojima was last confirmed alive on 1 February 2021 at the age of 110 years, 45 days. At time, he lived in Katsushika, Tokyo, Japan. 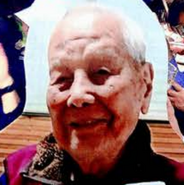 Aged 110.
Add a photo to this gallery

Retrieved from "https://gerontology.wikia.org/wiki/Kozaburo_Nojima?oldid=164148"
Community content is available under CC-BY-SA unless otherwise noted.