Shimizu was born in Japan on 10 October 1898. At the age of 109, she lived at the Sakuraen Nursing Home (Japanese: さくら苑) in Oku, Gifu City. On 22 January 2008, following the death of Suwa Kondou, Shimizu became the oldest living person in Gifu Prefecture. 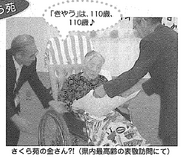 Shimizu in 2008.
Add a photo to this gallery

Retrieved from "https://gerontology.wikia.org/wiki/Kiyau_Shimizu?oldid=172342"
Community content is available under CC-BY-SA unless otherwise noted.