Katie Bunio (30 October 1911 – 28 July 2021) was a Canadian centenarian who was one of the oldest known survivors of COVID-19, having recovered from the disease days before her 109th birthday.

Bunio was born on 30 October 1911 in Alberta, Canada. She was raised on a homestead, and went on to work on a farm near before retiring to the small town of Redwater, Alberta. She had four children with her husband Michael, all of them daughters. As of 2020, she has 13 grandchildren, 30 great-grandchildren, and seven great-great-grandchildren.

During the coronavirus pandemic, Bunio contracted COVID-19. By 27 October 2020, three days before turning 109, she had successfully recovered, making her one of the oldest survivors of the disease. Due to restrictions, her 109th birthday was celebrated with a video call with her family. 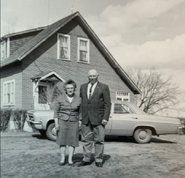 Bunio with her husband, Michael, in an undated photo

Bunio in an undated photo

Bunio celebrating her 108th birthday in 2019