Karre Mastanamma (born Martamma; 10 April 1911? – 3 December 2018) was an Indian centenarian who gained fame for appearing on the YouTube cookery channel Country Foods. At the time of her death, the channel had over two million subscribers, and was believed to be the oldest YouTuber in the world.

Mastanamma was born as Martamma in the village of Kopalle, Andhra Pradesh, India. Her claimed date of birth was 10 April 1911, but she did not have a birth certificate to prove it. She was adopted by a Muslim family who did not have a daughter, and her name was changed to Mastanamma. She refused to stay with her new family and soon returned to her village.

At the age of 11 or 15 (sources differ), Mastanamma married Bhushanam. He died a few years later, leaving her widowed at the age of 22. After her husband's death, Mastanamma was left to raise their five children alone, and earned a living by working in a paddy field. Four out of her five children died in a cholera epidemic that broke out in her village, and her only surviving child, David, lost his eyesight.

Mastanamma continued to work in the fields until 2016, when she was allegedly 105 years old, earning 200-300 rupees (about $2-4) per day. That same year, she began appearing on the Country Foods YouTube channel, gaining internet fame. She died in Gudiwada, Andhra Pradesh on 3 December 2018 at the claimed age of 107 years, 237 days. She had fallen ill a few weeks previously, and several days before her death she slipped into unconsciousness.

Mastanamma rose to fame in 2016 after her grandson, Karre Laxman, started a YouTube channel focusing on countryside cooking, and decided to involve his grandmother. The channel, Country Foods, features videos of Mastanamma cooking a variety of foods on an open wooden stove, using only dried leaves and wood to fuel the fire. These videos soon became very popular; the video "How To Make Egg Fried Rice..." has over 19 million views as of October 2020.

Despite initially not understanding what she was being filmed for, Mastanamma soon became a popular figure on YouTube. At the time of her death in December 2018, the Country Foods channel had over one million subscribers and more than 200 million views in total. Despite her death, new videos of Mastanamma have continued to be uploaded.

Mastanamma with her grandson, Karre Laxman (left) and his friend Srinath Reddy (right) 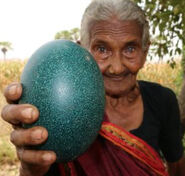 Mastanamma with an emu egg 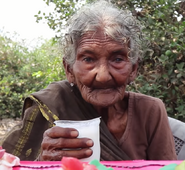 Retrieved from "https://gerontology.wikia.org/wiki/Karre_Mastanamma?oldid=152457"
Community content is available under CC-BY-SA unless otherwise noted.