Julia Y. Kabance (born 10 August 1910) is an American supercentenarian whose age is currently unvalidated by the Gerontology Research Group. A former member of the Women’s Army Corps, she is the oldest known living female American veteran of World War II.

A Native American, Kabance was born on the Prairie Band Potawatomi Reservation in Jackson County, Kansas, on 10 August 1910. She was named after her older sister, Julia Kabance (1888–1896) who died at age 7. She was the 11th of 12 children born to Frank and Mary Kabance, and she grew up on a farm on the reservation near Holton, Kansas. She went to Haskell Indian Nations University (then called Haskell Institute) and attended the University of Kansas for a semester, but had to drop out because she did not have enough money to continue.

Kabance joined the U.S. Army on 17 March 1943, at age 32, becoming part of the Women’s Army Corps during World War II. She remained in the Army for 33 months, serving as a clerical worker, primarily in Tacoma, Washington. Her hearing became impaired after contracting measles in 1945.

After leaving the Army, Kabance went back to Kansas to take care of her mother, who died four years later. She returned to work shortly thereafter, first for the Air Force in Topeka until the base closed. She then worked in accounting, first for the U.S. Army Corps of Engineers in Washington state, and then on the East Coast, then back to the Northwest. She also spent a lot of time volunteering with the Catholic Church.

Kabance never married and had no children. She retired in 1972 while living in Fort Lewis, Washington. She lived independently in her home in St. Marys, Kansas until February 2019, when a leg wound affected her mobility, forcing her to move to a nursing home in Wamego, Kansas. In November 2019, she became the first Native American to receive the Distinguished Citizen Medal from the Daughters of the American Revolution. She celebrated her 110th birthday in August 2020. Kabance is the second-oldest known living World War II veteran in the United States, after Lawrence Brooks.

Kabance as a child

Kabance in the Army during World War II 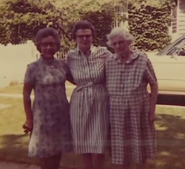 Kabance in an undated photo 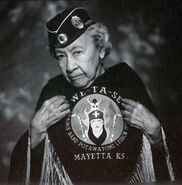 Kabance in an undated photo. 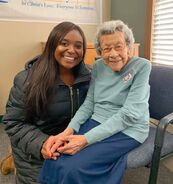 Kabance at the age of 109 in November 2019, with KSNT journalist Kelli Peltier