Juan Reyes claimed to have been born in Baybay, Aklan, Philippines on 23 November 1902. His parents were Demetrio De los Reyes and Faustina Tabol. He had two siblings: Rufina Delas Reyes (1905–deceased) and Juan de los Reyes (1907–1996).

He was elected as a Barangay Captain in the Philippines. He belonged to the Filipino Community of Watsonville.

He moved to the United States in the early 1970s with his wife. He worked as fisherman for 30 years before retiring. He got widowed in 2002.

Juan Reyes (on the far right) with his two brothers. 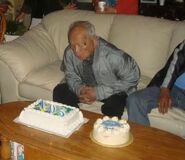 Juan Reyes on his claimed 109th birthday.
Add a photo to this gallery

Retrieved from "https://gerontology.wikia.org/wiki/Juan_Reyes?oldid=147111"
Community content is available under CC-BY-SA unless otherwise noted.