Jimenez Regla was born in Soyatlan del Oro, Jalisco, Mexico, on 8 December 1906. His parents were Telesforo Jimenez Garcia and Refugio Regla Preciado. He married Sofia Fregoso Ramirez (1917–1982). They had at least one child.

Jimenez Regla in his late life. 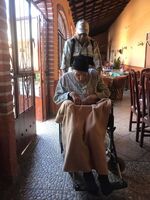 Jimenez Regla in January 2017, at the age of 110.
Community content is available under CC-BY-SA unless otherwise noted.
Advertisement