Jose Abreu Correa claims to have been born in Brazil on 20 September 1907.

As of 108th birthday, he had at least two living siblings Manoel (then aged 98) and Maria do Carmo (then aged 94).

Jose Abreu Correa on 105th birthday, with his wife Livia. 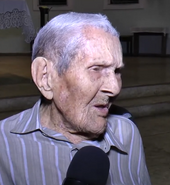 Retrieved from "https://gerontology.wikia.org/wiki/Jose_Abreu_Correa?oldid=169401"
Community content is available under CC-BY-SA unless otherwise noted.