Henderson was born on 24 December 1912, and grew up in Fort Worth, Texas. He entered the University of Texas at Austin in 1932 and joined the Texas Longhorns football team as a guard that same year. He remained a member of the team until 1936, when he graduated with a master's degree in education. He met his wife, Charlotte Curtis, two years his junior, in class in 1934. They were 22 married December 1939, and celebrated their 80th anniversary in 2019, as the oldest living couple in the world.

Henderson joined the Longhorns in an era when the University of Texas neither recruited players nor offered them scholarships. To support himself, he worked at the Gregory Gymnasium two hours a day to earn $30 a month (approximately $562 in present-day terms). The University of Texas was part of the Southwest Conference at the time and Henderson played his first season under coach Clyde Littlefield. That year, the team finished 5-1, behind conference champions Texas Christian University, and 8-2 overall. The following year, again under Littlefield, the Longhorns finished 2-3-1 in their conference and 4-5-2 overall. In 1934 Littlefield was replaced by Jack Chevigny and the squad went 4-1-1 in the conference, behind Rice, and 7-2-1 overall. In his final season, under Chevigny, the Longhorns were 4-6 overall and 1-5 in their conference.

Henderson and Curtis moved to Baytown, Texas after graduation. They later married, and worked in Houston, where Charlotte found employment as a teacher and John at Humble Oil. John retired in the 1970s and in 2009 returned to Austin as the first resident of Longhorn Village, a retirement community for the school's alumni. Henderson became the Longhorns' oldest living former player in 2010 and turned 100 in 2012. As of 2016, he has attended at least one Longhorn football game each season since his 1932 debut. In November 2019 John, 106, and Charlotte, 105, were named world's oldest living couple by Guinness World Records. 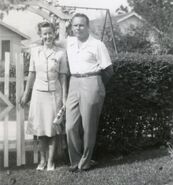 John and Charlotte Henderson, circa 1980. 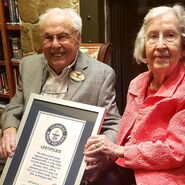 John and Charlotte Henderson being recognised as the oldest living couple by Guinness World Records, 28 August 2019.
Add a photo to this gallery

Retrieved from "https://gerontology.wikia.org/wiki/John_Henderson?oldid=152929"
Community content is available under CC-BY-SA unless otherwise noted.