John W. Hart Sr. (22 May 1904? – 2 June 2019) was an American longevity claim. If his claim were legitimate, he would be older than the former world's oldest validated men, Francisco Nunez Olivera and Masazo Nonaka.

Hart claimed to have been born in Sandy Hook, Mississippi (or in Hub, Mississippi), United States, on 22 May 1904. Hart was the youngest of 15 children, and was the last one living as of 2014. Hart had to leave school and start working after only completing first grade.

He married Rosena J. Hart (1919–1994) and they were married for 58 years, until Rosena's death. Together they had 4 children (two sons and two daughters): including John Jr., Mary H. Overstreet (1937–2016), Leon Hart and Minnie Menniweather. They also adopted one son. The family lived in Gulfport, Mississippi for some time. Of their five children, four are alive in 2014. During his life, he worked on the railroad for two years in Mississippi and the school district as a janitor for 12 years. He also served in the Navy for two years. His duties included cleaning and moving trucks. In the late 1960s, Hart and his wife moved to Portland, Oregon, where two of his children lived for few years (John Jr. and Mary). 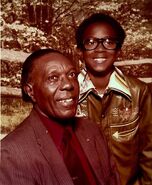 Hart with his adopted son, Kennard.

Retrieved from "https://gerontology.wikia.org/wiki/John_Hart?oldid=120182"
Community content is available under CC-BY-SA unless otherwise noted.