Joe Newman (13 January 1913 – 10 July 2021) was an American Centenarian and former candidate for US House of Representatives. He became famous in February 2020 after Inside Edition made a video titled “This 107-Year-Old Is Still Driving”. As of 21 October 2020, the video has over 2.9 million views.

Joe Newman was born in Illinois, USA on 13 January 1913. His parents were exiled by the Russian czar in 1900 for political dissension. Newman grew up in South Bend Indiana. After graduating high school in 1931, he attended Notre Dame university.

In 1950, Newman and his late wife, Sophie established the Logan Center, an organization that supports people with intellectual and developmental disabilities.

In 2014, at the age of 101, Newman ran as a write-in candidate for House of Representatives for Florida’s 16th district. He lost to incumbent Republican, Vern Buchanan. If Newman had won, not only would he have been the oldest active representative, but also, by the end of his term he would have been the longest-lived sitting or former representative ever. Newman, Daniel Durso,and other write in candidates had a combined total of 220 votes.

At the age of 103, he purchased a red Mercedes. He once said “If I’m not doing something, I might as well die”. He continued driving until March 2020 and as of April 2020 he has a 100-year old fiancée named Anita Sampson who he enjoys going out to operas and ballets with. 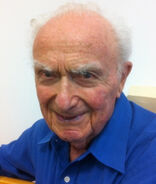 Newman running for House of Representatives in 2014