Joan Eileen Hocquard (née Reynolds; 29 March 1908 – 24 October 2020) was a British supercentenarian who was the oldest living person in the United Kingdom, a title she previously held jointly with Bob Weighton until his death on 28 May 2020. Her age is currently unvalidated by the Gerontology Research Group.

Hocquard was born on 29 March 1908 in London, England, and spent some of her youth in Africa. She married Gilbert Hocquard who shared her love of sailing and travelling. He died in 1981. She currently lives in Poole, Dorset, England. She had a partner, Ken, who was 20 years her junior.

Joan Hocquard died on 24 October 2020 in Poole, Dorset, England, UK at the age of 112 years, 209 days. After her death, 111-year-old Lilian Priest became the oldest living person in the United Kingdom. 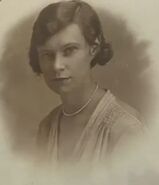 Joan Hocquard in her youth.

Joan Hocquard on her 107th birthday.

Joan Hocquard on her 108th birthday. 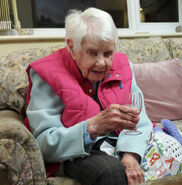 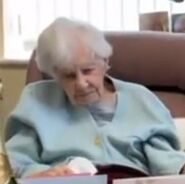 Joan Hocquard on her 112th birthday.
Add a photo to this gallery
Retrieved from "https://gerontology.wikia.org/wiki/Joan_Hocquard?oldid=156445"
Community content is available under CC-BY-SA unless otherwise noted.