Jessie Lichauco (née Coe; born 10 January 1912) is a Cuban-born American-Filipino philanthropist who has resided in the Philippines since the 1930s with her husband, lawyer, and diplomat Marcial Lichauco. They turned their home into a makeshift hospital during the Battle of Manila in World War II.

Jessie Coe was born in Isla de los Pinos, Cuba on 10 January 1912. Her father settled in Cuba after the Spanish–American War where he met Jessie's mother. She was later sent to St. Augustine, Florida, where she was raised in a convent school after she lost her parents as a young girl.

While working in Washington D.C., Coe met Marcial P. Lichauco, a Filipino lawyer who was working as a secretary for the OsRox Mission, which was seeking Philippine independence from the United States. She came to the Philippines upon Lichauco's invitation in the 1930s at the age of 18, marrying him on December 29, 1933 at the University of Santo Tomas Chapel. She and her husband were the first couple to be wed in the newly constructed chapel. Since then, Lichuaco has lived almost continually in the Philippines.

Lichauco joined the Asociacion de Damas de Filipinas and devoted time to Settlement House, which was run by the Asociación. Together with her husband, she opened their temporary shelter in Santa Ana to war refugees, transforming it into a makeshift hospital during World War II. The facility served at least 2,000 people. After the war, she continued her devotion towards Settlement House and became its president for nine years.

Lichauco is also one of the founders of the Red Feather Agency, later known as Community Chest, which raises funds for member charities. Lichuaco also supported about 100 youth in completing their education in her own capacity.

From 1963 to 1966, her husband served as Philippine Ambassador to the United Kingdom, Denmark, Norway, and Sweden, appointed by then-President Diosdado Macapagal. Lichuaco served as the Ambassador's hostess, representing the Philippines in international organizations and events. The Ambassador's residence in Palace Green was open to Filipino businesspeople, students, workers, and tourists.

After Marcial's death in 1971, Lichuaco spent a few years in the United States. She opened her house in Massachusetts to Filipino scholars and students needing a place to stay.

As of March 2004, she had six living children (including Nellie Fung) and 18 grandchildren.

Lichauco was granted Philippine citizenship in 2013 through Republic Act No. 10356 which was signed into law by President Benigno Aquino III. She was cited in the law for her social contributions to the country, adopting the Philippines as her home, speaking the Filipino language, and embracing Filipino culture.

Lichauco currently lives in Manila, Philipppines, at the age of 109 years, 157 days. 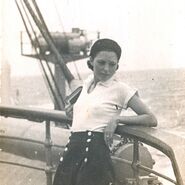 Lichauco in September 2014, entertaining participants of the 2014 WikiExpedition Santa Ana

Retrieved from "https://gerontology.wikia.org/wiki/Jessie_Lichauco?oldid=172415"
Community content is available under CC-BY-SA unless otherwise noted.