Jane Gilsenan (8 May 1898 – 8 Mar 2010) was a validated American supercentenarian who was the oldest known living person in the state of New York at the time of her death.

Janes Gilsenan was born in New York City on 8 May 1898 to Irish immigrant parents. Growing up in the neighborhood of Amsterdam Avenue, she was one of six siblings. Her earliest memories went back to when she was 10, when she learned to roller skate by holding the railings of a Manhattan church. She could recall what life was like during the Great Depression, and remembered her brothers serving in World War II.

A working woman, she had a career as a secretary, but also worked as an art buyer and a paralegal at different points in her life. She never married nor had children, but enjoyed spending time with her several nieces and nephews. She was an avid reader who took a keen interest in mystery and murder novels, and also had a hobby of tending to houseplants.

Janes Gilsenan died on 8 March 2010 at the Our Lady of Presentation convent in Woodrow, Staten Island, aged 111 years, 304 days. 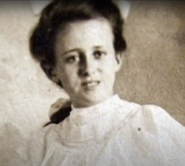 Retrieved from "https://gerontology.wikia.org/wiki/Jane_Gilsenan?oldid=173049"
Community content is available under CC-BY-SA unless otherwise noted.