James Emmanuel Sisnett (22 February 1900 – 23 May 2013) was a Barbadian supercentenarian whose age is validated by the Gerontology Research Group (GRG). He is the oldest person ever from Barbados, as well as the only validated supercentenarian from his country.

Sisnett was born on 22 February 1900 in Saint George, Barbados, then a part of the British West Indies, as the son and fifth child of James Albert Egerton Sisnett and Matilda Ann Sisnett (née Pitt). He grew up in Saint George, attended five years of school, and then trained as a blacksmith, a capacity in which he worked until 1920. He then joined the Kendal Sugar Factory, where he worked in numerous positions, until retiring in 1970 as the chief factory engineer. He was also a farmer, and continued in that trade until 2000.

Sisnett wed his first wife, Anita Dowling, on December 23, 1923 and had five children with her prior to her death in 1937. He married his second wife, Josephine Evelyn, in 1942 and had six more. Two of his 11 children predeceased him. At the time of his death, he had 25 grandchildren and 19 great-grandchildren. Among his siblings, two sisters lived to the age of 100 and two others died at 98 and 99.

In his later years Sisnett was referred to by several nicknames, including "Doc" and "Grandad". At the age of 100, he received the key to the city of Bridgetown, the capital of Barbados, and, in 2001, was awarded the Barbados Centennial Honour by Governor-General Clifford Husbands. He celebrated his 110th birthday with a gathering of 200 people, including Mighty Gabby, who wrote and performed a song for the occasion. A road in Saint George was named in his honor.

Sisnett died in his sleep of natural causes on 23 May 2013, at the age of 113 years, 90 days, in a nursing home in Christ Church, Barbados. He had an excellent memory and had been in good health prior to his death, having never been a hospital patient. Until his 100th birthday, his only doctor's visit had come at the age of nine, when he was given rum to cure a toothache. In 2007 he underwent laser eye surgery at the age of 106, to remove cataracts, and also suffered from hearing loss. In 2011 samples of his blood, as well as that of some of his relatives, were taken by an American company interested in the study of longevity.

At the time of his death he was recognized as the oldest verified man in the Western Hemisphere, the second-oldest man in the world, behind Jiroemon Kimura of Japan (who died 20 days after Sisnett), and the last surviving verified black man born in the 19th century. He is the only verified supercentenarian from Barbados and had been the oldest person in the country since at least 2009. He was, along with Kimura, one of the final two surviving men born in the 19th century. As of 2021, he remains in the top 20 oldest known men in recorded history. 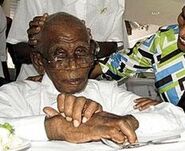