Reynolds was born on 6 April 1912 in Sheffield, South Yorkshire, England. He married his wife, Kathleen, at the age of 26. The couple had four children. His fourth child, Jayne, was born about 20 years after the first. Kathleen died suddenly from a stroke when she was 68. After his wife's death, Reynolds began travelling, visiting places such as Hawaii, Utah, and Portugal. In a video made by Guinness World Records he specified that he been to Portugal eight times and the USA half a dozen times.

Reynolds worked as a railway foreman for 40 years before retiring in 1975. He built a summer house at the age of 90. He enjoyed a shot of whiskey in his tea every morning and has a couple of shots of whiskey before going to bed. He frequently used his iPad to watch football, take pictures, and keep in touch with relatives.

In his later life, Reynolds lived in Hollingwood, Derbyshire, England. In December 2019, he fractured his pelvis and was in hospital for several weeks, where he also contracted pneumonia. In March 2020, it was reported he was immobile and on end-of-life care. As he was unable to break a world record for his 108th birthday, his family asked for donations to Helen’s Trust, a charity who helped provide him with care.

Reynolds died on 25 April 2020 at the age of 108 years, 19 days. At the time of his death, he was the third-oldest living man in the United Kingdom, after Bob Weighton and Harry Fransman. In February 2021, a pathway in Hollingwood was named "Jack Reynolds Way" in his memory. The signpost was officially unveiled on 6 April 2021, which would have been his 109th birthday.

Jack Reynolds being recognised as the oldest person to receive their first tattoo by Guinness World Records, 6 April 2016.

Jack Reynolds being recognised as the oldest person to ride a roller coaster by Guinness World Records, 6 April 2017. 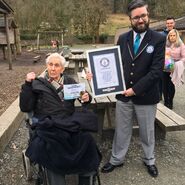 Jack Reynolds being recognised as the oldest person to ride a zip wire (zip line) by Guinness World Records, 6 April 2018.

Jack Reynolds being recognised as the oldest person to perform as a supporting artist on a TV show by Guinness World Records, 8 April 2019.

Retrieved from "https://gerontology.wikia.org/wiki/Jack_Reynolds?oldid=174056"
Community content is available under CC-BY-SA unless otherwise noted.