John "Jack" Henry Lockett OAM (22 January 1891 – 25 May 2002), was a farmer and an Australian veteran of the First World War. At the time of his death, aged 111 years, 123 days, he was the oldest man and freemason in Australia. He died just three days after fellow supercentenarian Christina Cock, Australia's oldest woman and oldest person ever, who was 114 at the time of her death.[1]

John Lockett was born in the small Victorian town of Waanyarra, near Bendigo, Victoria, Australia, on 22 January 1891. He left school at the age of 9 to work on a local farm. Later, he worked for his uncles in The Mallee. On 24 March 1916, he travelled to Mildura to enlist in the Australian Imperial Force. He served in France with the 38th Battalion, earning promotion to sergeant and was discharged on 20 September 1919.[2]

After the war, Lockett returned to The Mallee and selected a 640 acres (260 ha) block of land in Linga, Victoria, deciding to make his living as a farmer. In 1923, he married Maybell Ingwerson and they had four children together. In 1963, the couple retired to Bendigo, leaving the farmland (which now covered more than 130,000 acres (53,000 ha)), in the care of their children and grandchildren.[2]

In 1998, Lockett and his known fellow surviving veterans were awarded Chevalier (Knight) of the Légion d'honneur by the French government for their service in the war. In 2000, at the age of 109, he participated in the 2000 Olympic Torch Relay. On 11 June 2001, he was awarded the Medal of the Order of Australia for service to the community of Bendigo, particularly as a representative of Australia war veterans. Lockett died of kidney failure at age 111.[2]

In an episode of the Australian version of popular game show The Weakest Link, Lockett was the subject of the question "At 110, Australia's oldest man and Olympic torch carrier is Jack who beginning with L?"; the contestant incorrectly answered "Lindsey".[3]

John Lockett died in Victoria, Australia, on 25 May 2002. At the time of his death, he was survived by four children; Jack, Kevin, Joyce and Ron; fifteen grandchildren; and twenty-four great-grandchildren.[2]

Pictured whilst serving in the Australian Army 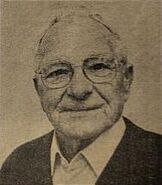 On his 105th birthday

On his 111th birthday

Undated
Add a photo to this gallery

Retrieved from "https://gerontology.wikia.org/wiki/Jack_Lockett?oldid=175834"
Community content is available under CC-BY-SA unless otherwise noted.