Hayes was born on 17 June 1900 in Barrhead, near Glasgow, Scotland, and emigrated to Canada in her 20s along with her parents (who later returned to Scotland). She was married to James Hayes from 1931 until his death in 1962. The couple had eight children, the last being a set of twins when she was 42. As well as raising a large family, Hayes worked as a house and office cleaner, including for conductor and composer Ernest MacMillan in the 1930s. She also did some babysitting. Hayes continued working until she retired in her 70s.

Hayes reportedly remained in good health until the age of 107, and was able to perform a Highland fling dance on her 100th birthday. She lived independently until she was 100, before moving to a retirement home and later a care home in Toronto, Ontario, Canada. She died on 5 November 2011 at the age of 111 years, 141 days. At the time of her death, she had 30 grandchildren, 50 great-grandchildren, and two great-great grandchildren.

Hayes in an undated photo 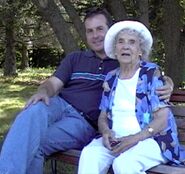 Hayes with her grandson, Chris, in an undated photo

Retrieved from "https://gerontology.wikia.org/wiki/Isabella_Hayes?oldid=157834"
Community content is available under CC-BY-SA unless otherwise noted.