Irene Easton was born on 15 October 1908 in Plaistow, just outside of London, England, UK. Her parents were John Alexander MacDonald Wood (1888–1964) and Florence Chiswick (1890–1980). Her maternal grandmother lived to the age of 93. She was an only child and the family came to Lethbridge, Alberta, Canada in 1911 to be with family who had already settled in the area. Her father worked in the courthouse as a clerk for a time, but when the job moved to Calgary, the family remained in Lethbridge, and he began developing and printing the pictures for the drug stores in town. As she got older, Easton used to collect the film from the stores twice a day and bring them to her father for developing and printing.

In 1932, Easton moved to Calgary with her fiancé and future husband, John Easton Jr. (1909–1998). The couple moved to Cranbrook, Alberta for a few years, after John got a job there just before they married. They had one child, Lynne, who was born nearly 12 years after the couple married. After a few years in Cranbrook, the couple moved back to Lethbridge where John took a job as a mechanic, and Irene raised their only child. She also volunteered to play piano for many of the local nursing homes.

At the age of 87, Easton had a hip replacement and decided to move in to an assisted living facility, and remained there for the next nine years. Her husband was taken to a care centre, but she continued visiting him and playing piano for him. He on 27 July 1998 at the age of 89.

Easton celebrated her 110th birthday at the Edith Cavell Center in Lethbridge, Alberta, the same care centre her husband had lived in. She died on 31 December 2018 at the age of 110 years, 77 days. 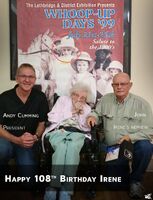 Irene at the age of 108, with her picture in the background at 8/9 years old.