Irene Elizabeth Dutton (née Jones; 16 July 1906 – 15 May 2020) was an American supercentenarian whose age has been validated by the Gerontology Research Group (GRG). She was the oldest known living person in Michigan, USA.

Irene Dutton was born as Irene Elizabeth Jones in Kalamazoo, Michigan, USA, on 16 July 1906. Her parents were Fred and Elizabeth (née DeRider) Jones. She was the first of four children born to the couple. Her siblings were Helen, Elias, and Elizabeth.

Irene Dutton died at her home in Kalamazoo, Michigan, USA on 15 May 2020 at the age of 113 years, 304 days. At the time of her death, she was the third-oldest living person in the United States, behind Hester Ford and Iris Westman. 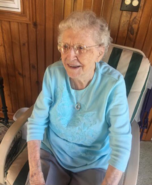 Irene Dutton on her 113th birthday.
Add a photo to this gallery

Retrieved from "https://gerontology.wikia.org/wiki/Irene_Dutton?oldid=136082"
Community content is available under CC-BY-SA unless otherwise noted.