Icie Clark (née Hedrick; 19 March 1907 – 4 August 2019) was an American supercentenarian whose age is validated by the Gerontology Research Group.

Icie Clark was born Icie Hedrick in Ruddle, West Virginia, USA, on 19 March 1907. Her parents were Fannie and John Hedrick. She had eight siblings, two of whom are still living as of 2019.

In 1943, Clark married her husband, Waldo, a patient at a hospital where she worked. They moved to Swissvale, Pennsylvania, where he worked at Union Switch and Signal. They had two children, Jean and Richard. Waldo Clark died in 1962.

Icie Clark lived in a nursing home in Turtle Creek, Pennsylvania. She died on 4 August 2019 at the age of 112 years, 138 days. She is survived by two children, four grandchildren, two sisters, one sister-in-law and five great-grandchildren. 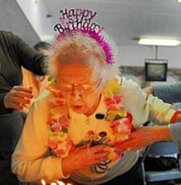 Icie Clark on her 105th birthday.

Icie Clark at age 110 with her two younger sisters Madeline and Pauline. 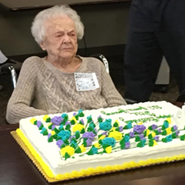 Icie Clark at her 112th birthday.
Add a photo to this gallery

Retrieved from "https://gerontology.wikia.org/wiki/Icie_Clark?oldid=113280"
Community content is available under CC-BY-SA unless otherwise noted.