Huang Changjiao claims to have been born in June 1909 in Qing dynasty (now China). Her scolarity stopped at primary school level; she is illiterate. When she was ten, she must be awaken before the dawn, and she gathered cows, shore porks, and worked in the fields. Huang had three sons, including one who moved with his wife in Hong Kong. In the 90s, she moved to Xiheshu Village. In her later life, she bred chickens and cleaned her house herself. She also used to play cards with other elderly people in the village, until her eyesight became too poor.

At the age of 111, Huang was reported to live with her caregiver, He Zidi [Chinese: 何子娣] (the sister-in-law of her daughter-in-law) who manages her daily life. According to her, the secret of Huang's longevity is that she eats four meals a day: at morning, at noon, at evening, and at night (she wakes up at 3 a.m. to eat). "She eats everything, she isn't a difficult eater, like rice noodles, noodles and wontons. If it's softer, she still will it eat."

Huang was also reported to be able to take care of herself, like eating, going to toilets and bathing, but to have a bit of dementia. Huang is "open-minded, she never keeps things for herself and likes talking with her family." She also likes watching television, doing exercise, walking around the house and basking in the sun." Also, Huang was able to walk; her only health problem is hypertension. 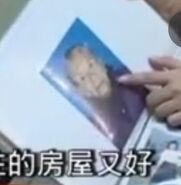 Huang Changjiao as an older woman. 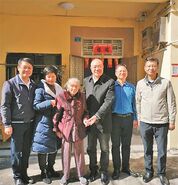 Huang Changjiao standing in April 2021, at age 111.
Add a photo to this gallery

Retrieved from "https://gerontology.wikia.org/wiki/Huang_Changjiao?oldid=172804"
Community content is available under CC-BY-SA unless otherwise noted.