Hilda Churchill (5 April 1911 – 28 March 2020) was a British centenarian who was the oldest known victim of the COVID-19 pandemic at the time of her death.

Churchill was born on on 5 April 1911 in Crewe, Cheshire, England. During the 1918-19 Spanish Flu pandemic, her whole family contracted the disease except for her mother. Although Churchill survived, her 12 month-old sister died from the disease.

Churchill was married to George Churchill, with whom she had four children. They moved to Salford, Manchester, England in 1936, where Hilda found a job as a seamstress.

Churchill lived in her own home until shortly after her 108th birthday, when she moved in to a Salford care home after a fall. At the time of her death, she had 11 grandchildren, either 12 or 14 great-grandchildren (sources differ), and three great-great-grandchildren.

In March 2020, Churchill contracted COVID-19 in the early stages of the coronavirus pandemic. She died on 28 March 2020 at the age of 108 years, 358 days, just four days after first displaying symptoms and less than 24 hours after testing positive for the virus. Her death was widely reported in both the British and international media. She was the oldest known victim of the pandemic until the death of 109 year-old American Helena Morton on 12 April 2020.

Hilda Churchill and her husband George.

Hilda Churchill and her daughter Margaret. 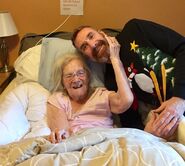 Hilda Churchill with her grandson Anthony Churchill on Christmas Day of 2019.