Helen Lettinga (née Smith; 6 February 1903 – 25 October 2014) was an American supercentenarian whose age is validated by the Gerontology Research Group (GRG). At time of her death, she was the second-oldest person in US state of Michigan.

Helen Lettinga was born in Casnovia Township, Michigan, USA on 6 February 1903. Her parents were Clarence Smith and Maude (née Carpenter) Smith. She graduated from Casnovia High School in 1921.

She married Fred Lettinga on 10 June 1925. The couple had at least two daughters Mary Doyle and Judith Crombez. She was widowed in 1985. 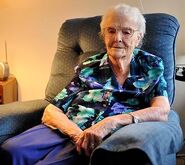 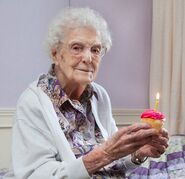 Helen Lettinga nearing her 110th birthday.
Add a photo to this gallery

Retrieved from "https://gerontology.wikia.org/wiki/Helen_Lettinga?oldid=125166"
Community content is available under CC-BY-SA unless otherwise noted.