Heinrich "Heinz" Homann (24 June 1911 – 24 June 2020) was a German centenarian who was believed to be the oldest man in Germany since the death of Gustav Gerneth on 22 October 2019 or since the death of Eberhard Voigt on 2 September 2019 if the unvalidated Gerneth case is excluded.

Homann was born in Stoppenberg, Essen, Germany, on 24 June 1911 as the fifth of ten children. He attended elementary school in Stoppenberg. In 1941, he married Gertrud, and shortly afterwards went to the Air Force. At the age of 105, he said: I was lucky, I didn't get wounded and survived the one year in captivity in Italy reasonably well. In 1953, he moved to Borbeck, Essen with his family. They had a small apartment in Furstabtissinstrasse in Essen-Borbeck-Mitte, where he still lived at the age of 105.

At the age of 98, Homann still drove a car. Following the death of Gustav Gerneth on 22 October 2019, Homann became the oldest known living man in Germany. 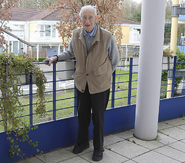 Heinrich Homann on his 109th birthday on 24 June 2020. He was hospitalized not long after this picture was taken, and died on the same day