Hama Yasukawa was born in Japan on 19 January 1907. She lost her parents around the third year of elementary school and went to live and work with her relatives. Her husband died early. They had 2 children (son and daughter). At the age of 27, she lived and worked in Osaka with two children. Her son got a job at a shipping company, but Yasukawa continued working until retirement.

Yasukawa became the oldest living person in Hyogo Prefecture following the death of 111-year old Matsue Kimura on 13 June 2018. On her 113th birthday, she was visited by the Mayor of Takarazuka, Tomoko Nakagawa. At that time, she had 4 grandchildren, 10 great-grandchildren and 6 great-great-grandchildren.

Yasukawa died in Takarazuka, Hyogo Prefecture, Japan, at the age of 114 years, 124 days. Upon her death, 114-year-old anonymous woman (of Miki) became the oldest person in Hyogo Prefecture.

Yasukawa was the third-oldest living person in Japan behind Kane Tanaka and Anonymous of Fukuoka. 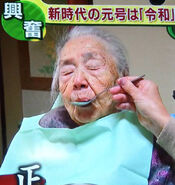 Hama Yasukawa on 1 April 2019.
Add a photo to this gallery

Retrieved from "https://gerontology.wikia.org/wiki/Hama_Yasukawa?oldid=174438"
Community content is available under CC-BY-SA unless otherwise noted.