Gyorgy Laszlo [Hungarian: László György] (21 August 1896 – 5 April 2004) was a Hungarian architect and centenarian. At the time of his death, he was the oldest living male in the country, and was thought to be the last WWI veteran of Hungary. However, Gergely Molnar was ‘discovered’ soon after his death.

György László was born on 21 August 1896, in Budapest, Austria-Hungary (present-day Hungary). As an infant on his mother’s arm, he saw the Millennial National Exhibition in 1896, and was probably the last living person to have witnessed the event. The same year, he traveled with the first scheduled metro line ever in Hungary (and continental Europe).

György enrolled the Budapest University of Technology in 1914. In May 1915, he volunteered for military service, and was sent to the Eastern Front in October. He got into Russian captivity in June 1916. After the October Revolution in 1917, he was freed and he joined the Red Army. He continued his studies in the Soviet Union.

György returned to Hungary in 1924. He finished his studies and started to work as an architect. He planned more than 200 buildings and structures until his official retirement in 1957, the most notable ones being the Rákospalota Evangelic Church’s dome and the first underground water reservoir in Buda. Between 1945 and 1949, he worked in the council of Rákospalota (now part of Budapest) and helped in its rebuilding which was needed after WWII. In the 1950s, he taught at the University of Technology. In 1956, at the age of 60, he took advanced language exams from Russian and German. Afterwards, he would work as an interpreter and text translator. In the 1980s, he still worked as a private architect. He gave up work in 1990 at the age of 94 because of his worsening eyesight.

György lived an active life. He had a healthy diet consciously and travelled a lot. During summers, he would spend much of his time in the thermal bath of Balatonfüred. He had at least one son and one daughter, and a number of grandchildren. As a centenarian, he collected and published his letters from WWI. On his 107th birthday, he was reported to be in great health.

György László became the oldest living male in Hungary upon Jozsef Petho’s death in October 2002. He died as the second-to-last Hungarian WWI veteran on 5 April 2004, in Budapest, at the age of 107 years, 228 days.

György László organizing his letter collection as a centenarian. 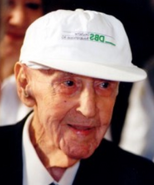 György László as a centenarian. 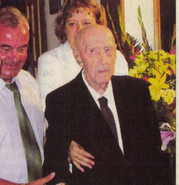 György László on his 107th birthday.