Gregory was born in a town called Mytilene, where he worked in a restaurant. He married and had at least one daughter, named Mary (née Pandazes) Sofos. She died in 1993.

In August 1916, Gregory emigrated to New York, United States, with the ship Vasiless Constantinos. At some point in his life, he relocated to Los Angeles, California, where he lived for the rest of his life.

At the time of his 102nd birthday, it was reported that he was in excellent physical shape, still being able to cook and maintain his garden in California. The secret to his longevity was said to be good diet habits, a tranquil and unfazed personality and avoidance of tobacco and alcohol.

Pandazes died on 22 December 1983 at the age of 110 years, 341 days. He is one of only two validated supercentenarians born in Greece. His verification came about as a collaboration between SSA study researchers and their contact people in Greece; the latter ones being able to provide his original birth certificate for age validation purposes. 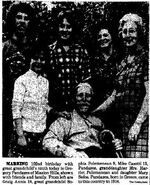