Gordon "Gordy" Saunders (12 July 1910 – 18 September 2020) was an American supercentenarian whose age is currently unvalidated by the Gerontology Research Group (GRG).

Saunders was born in Blue Earth, Minnesota, United States, on 12 July 1910 to Charley Saunders and Della (née Miller) Saunders. He was one of three brothers. His father lived to be 97. His parents were farmers and Saunders attended school in Blue Earth. For some time he played in his older brother's band.

After high school he did several jobs, including working in the plumbing and tile business. He joined the Army in his early 30s in 1943 or 1944, and served in World War II. He never talked about the time spent in the Army, but was stationed in Alaska at least some of the time. After his service in the Army, Saunders started his own business called Gordon Saunders Decorator. He did painting, wallpapering, staining woodwork, installing carpeting and floor tile. He did a lot of work in conjunction with Ankeny and Wiederholt Builders. They would build houses and stores and Saunders would come in and finish it up with the painting and other work. He married Catherine "Katy" Lang in Chicago, Illinois. The couple had no children.

At the age of 67, he sold his business to Gudahl and Nesbitt and retired. It was then he took up hunting and fishing and started spending most of his time doing that. He was going hunting and fishing even in his late 80s. He used to drive a car in his 90s, but stopped at the age of 98. His wife died in 2003. Saunders moved in to St. Luke's Lutheran Care Center after his 100th birthday. 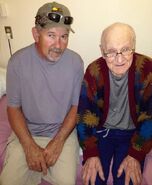 Gordon Saunders at age circa 108.
Add a photo to this gallery

Retrieved from "https://gerontology.wikia.org/wiki/Gordon_Saunders?oldid=149535"
Community content is available under CC-BY-SA unless otherwise noted.