Alf Gustaf Goesta Vestlund (Swedish: Gösta; 15 June 1913 – 5 October 2020) was a Swedish writer, teacher, Doctor of Philosophy and centenarian who was the oldest living man in Sweden at time of his death. He also was the second-oldest living man in the Nordic region after Denmark's Eloff Rasmussen.

After the death of Ernst Blixt on 18 September 2019, Vestlund became the oldest living man in Sweden, and held the title until his own death in Stockholm, Sweden, on 5 October 2020 at the age of 107 years, 112 days. 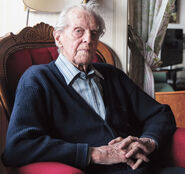 Vestlund at the age of 104
Add a photo to this gallery
Retrieved from "https://gerontology.wikia.org/wiki/Goesta_Vestlund?oldid=175745"
Community content is available under CC-BY-SA unless otherwise noted.