Abbott was born in Forestville, New York, to George Burwell Abbott (1858–1942) and Hannah May McLaury (1869–1940). He later moved to the city of Salamanca, which twice elected his father mayor. In 1898, his family moved to Cheyenne, Wyoming, where he attended Kearney Military Academy. Within a few years, his family returned to New York, and he graduated from Hamburg High School in 1907. Four years later, he obtained a Bachelor of Arts degree from the University of Rochester, where he wrote his first play, Perfectly Harmless, for the University Dramatic Club. Abbott then attended Harvard University, to take a course in playwriting from George Pierce Baker. Under Baker's tutelage, he wrote The Head of the Family, which was performed at the Harvard Dramatic Club in 1912. He then worked for a year as "author, gofer, and actor" at the Bijou Theatre in Boston, where his play The Man in the Manhole won a contest.

Abbott started acting on Broadway in 1913, debuting in The Misleading Lady. While acting in several plays in New York City, he began to write; his first successful play was The Fall Guy (1925).

Abbott acquired a reputation as an astute "show doctor". He frequently was called upon to supervise changes when a show was having difficulties in tryouts or previews prior to its Broadway opening. His first hit was Broadway, written and directed in partnership with Philip Dunning, whose play Abbott "rejiggered". It opened on September 16, 1926, at the Broadhurst Theatre and ran for 603 performances. Other successes followed, and it was a rare year that did not have an Abbott production on Broadway.

He also worked in Hollywood as a film writer and director  while continuing with his theater work.

In 1963, he published his autobiography, Mister Abbott.

Abbott was married to Edna Lewis from 1914 to her death in 1930; they had one child. Actress Mary Sinclair was his second wife. Their marriage lasted from 1946 until their 1951 divorce. He had a long romance with actress Maureen Stapleton from 1968 to 1978. She was 43 and he was 81 when they began their affair, then ten years later Abbott left her for a younger woman. His third wife was Joy Valderrama. They were married from 1983 until his death in 1995.

Abbott was a vigorous man who remained active past his 100th birthday by golfing and dancing. He died of a stroke on January 31, 1995, at his home on Sunset Island off Miami Beach, Florida, at age 107. The New York Times obituary read, "Mrs. Abbott said that a week and a half before his death he was dictating revisions to the second act of Pajama Game with a revival in mind, in addition to working on a revival of Damn Yankees. At the age of 106, he walked down the aisle on opening night of the Damn Yankees revival and received a standing ovation. He was heard saying to his companion, 'There must be somebody important here.'" Just thirteen days before his 107th birthday, Abbott made an appearance at the 48th Tony Awards, coming onstage with fellow Damn Yankees alumni Gwen Verdon and Jean Stapleton at the end of the opening number, a medley performed by the nominees for Best Revival of A Musical, which included Grease, She Loves Me, Carousel, and his own Damn Yankees.

He was cremated at Woodlawn Park Cemetery in Miami and the ashes were taken by his wife.

In addition to his wife, who died in 2020 at 88, Abbott was survived by a sister, Isabel Juergens, who died a year later at the age of 102; two granddaughters, Amy Clark Davidson and Susan Clark Hansley; a grandson, George Clark, and six great-grandchildren. 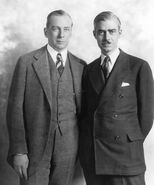 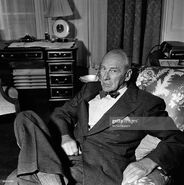 George Abbott holds a copy of the street sign placed at the corner of W.45th Street and Broadway in his honor on the occasion of his 100th birthday