Freda Violet Hodgson (née Williams; formely Hinde; 26 September 1913 – 15 May 2021) was a British centenarian who is one of the oldest known survivors of COVID-19, having recovered from the disease at the age of 106. She also recovered from the Spanish Flu more than a century beforehand, making her one of a small number of people to have survived contracting both diseases.

During the World War I, Freda remembers hearing the bomb blasts outside during the war as she hid in the basement of her home.

She has met the Queen Elizabeth’s grandparents King George V and Queen Mary at Buckingham Palace.

She married William Hodgson on 16 July 1959. The couple not had children.

Her eldest daughter died in 1979 when the aircraft she was in was shot down by terrorists. Her husband William Hodgson died in 2000.

As of May 2020, she had one living child, a unreported number of grandchildren and 52 great-grandchildren. She lived at Whiteley Village care home in Hersham, Surrey, England. 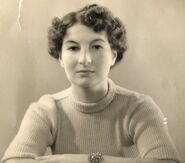 Freda Hodgson as a young woman

Freda Hodgson as a older woman

Freda Hodgson on her 100th birthday

Freda Hodgson on her 106th birthday