Francisca Tereza da Conceicao claimed to have been born in Campo Redondo, Rio Grande do Norte, Brazil on 16 July 1900. She married Diocldcio Ferreira de Lima and had 12 children. Her husband died in 1974 at the age of 71. At the claimed age of 105, she suffered a stroke and lost her legs locomotion.

Francisca Tereza da Conceicao on her claimed 100th birthday in 2000 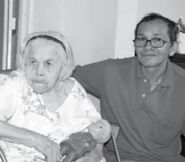