Sister Francine Guillon (4 November 1910 – 1 June 2021) was an French supercentenarian whose age is currently unvalidated by the Gerontology Research Group (GRG).

Francine Guillon was born in France on 4 November 1910. She spent her active life near penniless people.

On her 100th birthday in November 2010, Guillon was visited by the mayor of Verrieres-le-Buisson Bernard Mantienne, and his town councillors Marie-Josiane Degerit and Fernand Biolley. She celebrated her birthday with her family and with the residents of the nursing home Saint-Charles.

In January 2019, Guillon was interviewed by Ferroudja Chabane. She said about the Lord: "He is the path, the truth, the life. I go in my room and thanks the Good Lord for having given me the life and for the love he gives me". She also says: "No, I worth nothing much, but God holds me."

In November 2020, she celebrated her 110th birthday in Verrieres-le-Buisson.

Francine Guillon died in Massy (or Verrieres-le-Buisson), Essonne, Ile-de-France, France on 1 June 2021, at the age of 110 years, 209 days. She was the third-oldest living person in Ile-de-France at the time of her death, behind Gabrielle Ormand and Albertine Miton, and the second-oldest living person in Essonne departement behind Gabrielle Ormand. 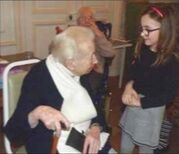 Francine Guillon on her 100th birthday in 2010, with Bernard Mantienne.
Add a photo to this gallery

Retrieved from "https://gerontology.wikia.org/wiki/Francine_Guillon?oldid=173807"
Community content is available under CC-BY-SA unless otherwise noted.