Foon Hay Lum (Chinese: 林焕喜; 30 July 1908 – 24 April 2020) was a Chinese-born Canadian supercentenarian whose age is currently unvalidated by the Gerontology Research Group (GRG). She was the first known supercentenarian victim of COVID-19.

Lum was born in a village in southern China (then Qing dynasty), on 30 July 1908. At the age of 18, she married a 23-year-old adventurer who had returned to his homeland from Canada, Jack Lum (14 September 1903 – 26 September 1971). The husband and wife had lived apart for 32 years. After moving to Canada, Lum and her husband bought the house on Cowan Avenue, Toronto to be close to their daughter, Har Ying Lee, who lived nearby. The couple paid $10,000 to buy the semi-detached Victorian house in 1965. Lum used to grow fruits and vegetables in the back garden. Lum became a social activist at the age of 70. She joined others in the Chinese community in seeking an apology and compensation from the federal government for the head tax and the exclusionary immigration policies that followed. In June 2006, Lum was present in the House of Commons in Ottawa for then-prime minister Stephen Harper's formal apology to Chinese Canadians on behalf of the Canadian government.

Lum lived on her own in a three-storey home in Toronto's Parkdale neighbourhood until she was 107 years old. She had never been on medication or went to the hospital until an infection sent her there at the age of 107. As of June 2019, she was the oldest of the 14 centenarians at Mon Sheong Home for the Aged in downtown Toronto. Her granddaughter thought that the secret to Lum's longevity had a lot to do with Lum drinking much water, eating steamed food and staying active as a lifelong gardener.

Coincidentally, other Chinese-born supercentenarian claim Wong Tak (1908?–2019) was also a resident of the same home. 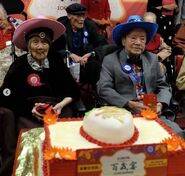 Foon Hay Lum with Wong Tak in June 2019.
Add a photo to this gallery

Retrieved from "https://gerontology.wikia.org/wiki/Foon_Hay_Lum?oldid=160423"
Community content is available under CC-BY-SA unless otherwise noted.