Florence Alice Antoinette Carroll (née Brunese; 9 June 1907 – 15 April 2021) was an American supercentenarian who was the oldest known person living in the U.S. state of Connecticut at time of her death. Her age is validated by the Gerontology Research Group (GRG).

Florence Brunese was born in Millerton, Duchess County, New York, USA on 9 June 1907 to Italian-born father Paul Emile and Mary Ann (McCann) Brunese. As a young adult, she worked as a cook in Lakeville, Connecticut. She married John Carroll on 9 February 1930, and the couple had nine children, four of whom are deceased as of 2014.

Carroll died on 15 April 2021, at the verified age of 113 years, 310 days and was just two days shy in becoming the second-oldest living person in the United States, since Hester Ford died two days later. 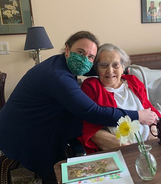 Florence Carroll at age 112.
Add a photo to this gallery

Retrieved from "https://gerontology.wikia.org/wiki/Florence_Carroll?oldid=168563"
Community content is available under CC-BY-SA unless otherwise noted.