Florence Mary Canonic (née Lyon; 8 February 1902 – 25 December 2012) was a pending American supercentenarian. She was the oldest known people in the US state of Utah at the time of her death.

She graduated from High School and after attending the University of Utah and the University of Nevada, she began her teaching career. She taught in a number of small one room schools in Nevada finally teaching in Genoa, Nevada, where she was the principle.

She married Bert Clarence Canonic on 4 August 1927 in Carson City, Nevada. The couple had 7 children. Her husband died in 1992.

She taught in Pyramid Lake Nevada and then in the Reno School system until her retirement. She loved to travel taking many trips extending to several countries around the world. She was an active member of the Church of Jesus Christ of Latter Day Saints. 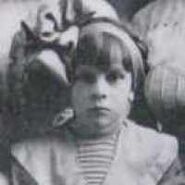 Canonic as young girl
Add a photo to this gallery

Retrieved from "https://gerontology.wikia.org/wiki/Florence_Canonic?oldid=174463"
Community content is available under CC-BY-SA unless otherwise noted.