Emily Elizabeth McCool (13 December 1909 – 11 March 2021) was a Canadian supercentenarian whose age is currently unvalidated by the Gerontology Research Group (GRG).

McCool was born on 13 December 1909. She lived on St. Joseph Island, Ontario until she was 20 years old. She moved to Sault Ste. Marie, Ontario. In 1938, she married George Cahoon. They had one daughter, Patricia Allan (1940–2012). In 1950, she divorced. In the 1960's, she remarried to Loren McCool. She worked in a variety of grocery stores as well as a proofreader for the Sault Star, also working as a candy striper at the Sault hospital.

At the age of 101, she came to reside at the assisted living building (Kotitalo) at the Ontario Finnish Resthome. At the age of 107, in June 2016, McCool transitioned into 24-hour nursing home care at Mauno Kaihla Koti. 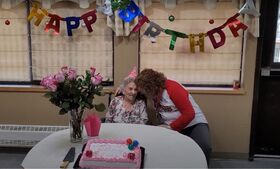 Emily McCool on her 111th birthday.
Add a photo to this gallery

Retrieved from "https://gerontology.wikia.org/wiki/Emily_McCool?oldid=164309"
Community content is available under CC-BY-SA unless otherwise noted.