Montoya Ordonez was born in Sandona, Narino Department, Colombia on 13 July 1904. She was baptized on 16 July 1904 by the priest Teofilo Alban. After her family lost their home when Elvira was 9 years old, she had to work hard to support her three siblings. She had one brother that went to Peru and Elvira never saw him again. At the age of 22, she married Isaias Nazmin. The couple had four children, three of whom died at an early age, leaving only Rosario who cared for her mother in her final years.

At the age of 108, she had 4 grandchildren, 13 great-grandchildren and 4 great-great-grandchildren. Her daughter, Rosario Nasmin, said that Elvira has not been walking for a year at that time. She lived in the Melendez neighborhood of the municipality of Sandona, Narino Department, Colombia. After the death of Heroina Rivero Penaranda, she became the oldest known living person in Colombia. 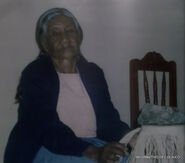 Elvira Montoya Ordonez at age 100.
Add a photo to this gallery

Retrieved from "https://gerontology.wikia.org/wiki/Elvira_Montoya_Ordonez?oldid=175283"
Community content is available under CC-BY-SA unless otherwise noted.