Elsie Rich (née Schiffman) (6 August 1901 - 29 December 2011) was an Austrian-American supercentenarian who was one of the oldest known people in California when she died. Her case is validated by the Gerontology Research Group (GRG).

Elsie Rich was born Elsa Schiffman in Vienna, Austria on 6 August 1901. She spent a lot of her childhood working in her family's textile factory. Her father died when she was 12; her mother then took over the textile factory. As a teen, she was greatly influenced by the work of Alfred Adler, an Austrian psychiatrist and Freud contemporary.

She married businessman Henry Siegfried Reich (1902-1976) in May 1932. They fled to New York in 1938 to avoid Hitler, after Henry awoke to find a Nazi flag draped over the hotel outside their house. While in America, she and Henry changed their surname from Reich to Rich, and she changed her first name from Elsa to Elsie.

In the early 1940s, the couple bought a chicken farm in Santa Rosa, and they remained there until Henry's death. In 1943, Elsie and Henry founded Congregation Beth Ami, a synagogue. In 1947, Elsie co-founded Petaluma Haddassah, which served both as a club for the growing number of young Jewish women in the scattered, rural area, and as a place to discuss Israel and current issues affecting Jews.

Henry Rich died on 6 January 1976, a month and a half before his 74th birthday, after over 43.5 years of marriage. He and Elsie never had any children. In Elsie's later years, she was a very good Scrabble player. She led exercise classes well into her 90s and lived in her apartment until she was 106. Her secret to living a long life was "never smoking, drinking little and staying fit." She could still do the splits aged 90.

When Elsie turned 110, GRG co-founder L. Stephen Coles and his wife visited her. Coles said that he enjoyed meeting Rich and he found her quite communicative, despite her poor hearing. He said, "She was responsive to our questions once she knew what we were asking."

Elsie Rich passed away at the Vintage Brush Creek senior care facility in Santa Rosa, California, USA, on 29 December 2011, at the age of 110 years, 145 days. She was one of the oldest living Jews at the time of her death. She was survived by over a dozen good friends. 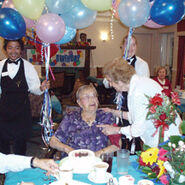 Elsie Rich and Dr. Stephen Coles in September 2011.
Add a photo to this gallery

Retrieved from "https://gerontology.wikia.org/wiki/Elsie_Rich?oldid=157254"
Community content is available under CC-BY-SA unless otherwise noted.